Are there any quiet washing machines?

If you have your washing machine in an open plan kitchen, you will be all too aware of how much of a pain in the neck they can be!

You may have spent all day at work and just need a few minutes of quiet to unwind before bed.

But instead, you are met with the monotonous drone of a washing machine.

But if you do have it positioned in close proximity to the room you relax in, a noisy washer can ruin anything you’re trying to watch on TV and stop you being able to hear yourself think.

What’s more, if you have young children, a noisy washing machine is all it takes to ruin an entire night’s sleep!

Why are washing machines so noisy?

Typically, the noise you will hear coming from your washing machine is being generated by its motor.

To combat this, many top-of-the-range washing machines are now being fitted with motors that have been specifically designed to run quieter.

There are also other developments like AntiVibration technology and sound insulation that are really helping to reduce the amount of sound being emitted by washing machines.

What is a washing machines noise level?

The noise level of a washing machine is the average amount of noise it will emit throughout its cycle. This is usually measured in decibels.

We believe that anything under 55 decibels should be considered a quiet washing machine, as 55 decibels is said to be about the equivalent noise level of the sea and quieter than the average conversation in a restaurant.

To put this into perspective, we have put together a graphic that illustrates just how quiet 55 decibels is, using data from Industrial Noise Control. 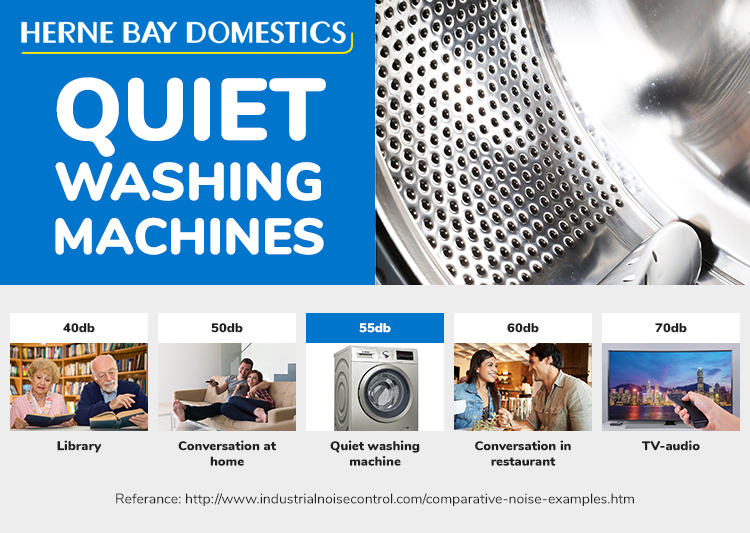 Herne Bay Domestics are the local Euronics store for Canterbury and surrounding areas. They offer free delivery throughout their entire service area and are able to sell top quality products from Euronics online or in-store at unbeatable prices.

Latest offers in your inbox

Be the first to hear about our latest Money-Off deals, Great Offers and Free Competitions. Sign up in seconds now.

Click Here
50% Complete
Join Our Newsletter & never miss a deal again! Competitions, money off, deals and more all direct to your inbox.
By submitting your details you consent to their use in accordance with our Privacy Policy.

Facebook Review
David Phillips
Read More
Third time I've use you and every time has been a great shopping experience, with courteous and professional guidance coupled with a quick delivery service, so much better than the warehouses with their inexperienced commission chasers.
Facebook Review
Natasha Sutton
Read More
You can go to different places for comparing prices. But none of them will do what this company did for me. Really a community spirit and driven to make something work with a fridge/freezer - microwave - cooker - Kettle - hoover and more... They came to help set my place up and were really kind in making sure everything was working okay before leaving. Will never forget it and extremely grateful to the HBD team!
Facebook Review
Laura Creaney
Read More
Fantastic service!!! Would highly commend... thank you for such great service so close to Christmas!!!!
Fast & Free Delivery

Delivery is 100% FREE on every item on this website.

Simply let us know the time of day & date you would like your item(s) to be delivered to your home at the checkout and we will give you a call back to arrange the time best suited to you.

We are also happy to give you a call an half hour before your delivery is set to arrive to ensure you don’t miss your delivery, just let us know you’d like this service (it’s free too).

Our delivery vans work from 9AM to 5PM, Monday to Saturday.

We are well known locally for our exceptional service, but it is important to note that we are also the cheapest too!

That is why every single product on this website comes with a price match promise. Meaning that if, by some chance, you can find the same product cheaper on AO, John Lewis, Currys, Argos or any other Euronics dealers website, within 7 days of purchase - we will refund you the difference.

We price match against AO, John Lewis, Currys, Argos and any other Euronics dealers website

Simply provide us with the website address of the product on our competitors website & your order number and we will refund you the difference.

Despite being a local, family-run business, we wanted to make sure we had an industry-leading finance offering. We understand that being able to spread your payments over a number of months can be a real life-saver, so we have decided to partner with V12 Finance.

To cover as many products as possible, we have also implemented interest-bearing finance on any purchase above £250. You can spread the cost of this purchase over 12 or 24 months. We are offering this finance at a rate of 15.9% APR. Again, this is lower than the rate offered by all our major competitors.

Just check our simple finance calculator on qualifying products to work out exactly how much you will have to repay each month.

To apply, select the products you wish to buy and choose ‘finance’ during checkout. Then, complete V12’s online application form and wait 10-20 seconds for the credit decision. In exceptional cases, the decision may come back as ‘referred’, and you will receive the decision by email later. Once approved, we’ll deliver the goods to your home address.

Check Out Our Reviews

Hundreds of positive reviews for a reason!

We want every customer that shops with us to be as satisfied as possible, which is why we'll always go the extra mile to ensure you get the customer service you deserve.

We pride ourselves on offering that human touch in a digital world - where you can call up and get through to a real person that'll do whatever they can to help.

Whether you're shopping for appliances online, booking a repair or visiting our appliance store in person - you'll be greeted with a smile and looked after the whole way through.

But don't just take our word for it, see what others have said about their experiences with us on any of the following review websites: